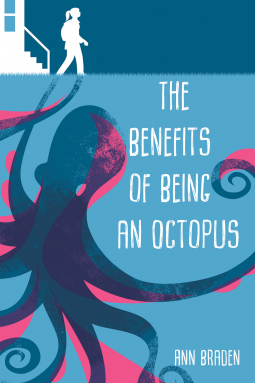 The Benefits of Being an Octopus (TBBO) follows Zoey, a 7th grader who is trying to survive Middle School but has more responsibilities than most adults. She tries to be invisible but when a teacher, Ms. Rochambeau, recognises part of herself in Zoey everything changes.

TBBO is a relatively short read but packs in many current topics such as friendship, bullying, domestic abuse, gun control, young carers, and poverty.

Zoey lives with her mother, Kara, her mother’s partner Lenny, Lenny’s father Frank, and Zoey’s three younger siblings – Bryce, Aurora and Hector. As her mother works shifts, the responsibility falls to Zoey to care for her siblings at a time when someone should be looking after her. Zoey starts to realise that her mother’s relationship with her partner Lenny is not a healthy one, and Zoey finds herself on a path to self-discovery.

What I loved about this book is how it cleverly weaves in psychology, as we get to know the characters, their motivations and the impact of being exposed to an unhealthy domestic environment. We have a direct insight to Zoey’s psychology and the perceptions of the people around her, specifically how she comes to understand how her mother is suffering from psychological abuse and her gradual awakening to how that the situation can change and that she has the power within herself to determine that change.

There is also an interesting but subtle underlying narrative between Frank, Lenny and Bryce. There is not a lot said about Frank, but what is said only demonstrates aggression on his part. When Bryce started to mimic Lenny’s behaviour, I became aware that Lenny may have been mimicking what he had grown up with – an aggressive and domineering father. This is not to condone or excuse Lenny’s behaviour but it exposes how impressionable children are and how important it is for them to have people in their lives who tell them that things can be different. This story is about Zoey’s experience of that very scenario.

I won’t spoil the ending of this story but I will say that the author got the balance right. There is not necessarily a happy ending but a realistic one. For any children/young adults reading this book and facing challenges in their lives they will come to know what is realistic and possible – there are no fairy tales here, no princes or princesses, but the power within ourselves to change our situations.

It struck me that there is nothing melodramatic about this book. Zoey’s situation is entirely believable and more than likely a reality for many: past, present, and future. That is why I would love to see this book in schools. There is a message here for each child or young adult who reads it, no matter who they are or where they come from.

I loved this book. Five stars.

Many thanks to NetGalley and Sky Pony Press for providing a copy of this ARC in exchange for an honest review.

You can follow Ann Braden on Twitter. The Benefits of Being an Octopus is out in the UK on 20th September 2018.

Have you read The Benefits of Being an Octopus? What did you think? Feel free to comment or link your own review below.

2 thoughts on “Book Review: The Benefits of Being an Octopus – Ann Braden”