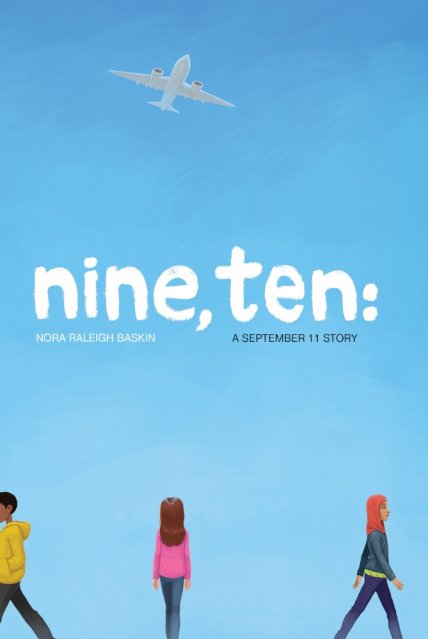 Ask anyone: September 11, 2001, was serene and lovely, a perfect day until a plane struck the World Trade Center.

But right now it is a few days earlier, and four kids in different parts of the country are going about their lives. Sergio, who lives in Brooklyn, is struggling to come to terms with the absentee father he hates and the grandmother he loves. Will’s father is gone, too, killed in a car accident that has left the family reeling. Naheed has never before felt uncomfortable about being Muslim, but at her new school she’s getting funny looks because of the head scarf she wears. Aimee is starting a new school in a new city and missing her mom, who has to fly to New York on business.
These four don’t know one another, but their lives are about to intersect in ways they never could have imagined.

I originally saw this book featured on another blog and I was so intrigued I ordered it immediately. I’ve read many articles and seen many documentaries about 9/11 but never read any books on it, and I was also interested to find out how a middle-grade book would tell the story.

To start off, I want to give a bit of context about myself and the book in relation to 9/11 as I think this has impacted my review (which I’ll explain later on).

On the day of the attack I was 15 years old so I remember it very well. Due to the time difference between the UK and the east coast of the US, I was leaving school not long after the news broke. My father was picking me up and when I got in the car he looked horrified and said: “There’s been a terrorist attack in New York”. At this stage in my life, that meant nothing to me. The word ‘terrorist’ was not in my vocabulary.

We got home and watched the horror unfold on the news with my mother and sister. They all went to make tea and left me alone watching the TV, when the footage emerged of the second plane hitting the second tower. I’ll never forget that moment, it was so surreal.

Back to the book. It was published in 2017 and is intended for children age 8+, so at the time of publication any eight-year-old reading it would’ve been born long after 9/11. This is what I tried to focus on. I tried to disconnect from my own life and imagine I am around eight-years-old. I know very little about what happened, I have no immediate emotional connection to that day; no memories, no assumptions.

The book follows the lives of four children in the days running up to, and day of, the terrorist attacks. They live in different states. In some respects their lives are very different; in other ways, their lives are very similar. They’re all trying to establish who they are, grappling with their identities and those of the people around them. Eventually, they’ll all end up in the same place, connected by the same event.

For me, this book is problematic for a couple of reasons. Firstly, the synopsis describes the worlds of the children ‘intersecting’. The four stories of the children are interesting but they do not necessarily come together at the end. Yes, they end up in the same place and they all have personal relationships to the attacks, but I expected the stories to crossover and they did not. It left the ending feeling a bit disjointed.

Secondly, the book fails to give any bigger context. Although I do not expect a middle-grade book to provide an in-depth explanation of the years of complicated events leading up to 9/11, I think the book would’ve benefited from an overview of the organisation behind the attack. This, in my opinion, would help the reader’s understanding of the events.

Conversely, this book does one thing particularly well – it encourages tolerance, equality, and acceptance. It serves as a reminder that regardless of our race, religion, or culture, we are all first and foremost humans. We hurt the same way and we should support each other in times of need.

I would be curious to know of anyone who maybe has read this book with a class. I fully acknowledge that I am biased and despite my efforts, it is virtually impossible for me to disconnect from my experience of that day. I’ve been honest in my review but I am open to constructive challenges and discussion.

Leave your thoughts in the comments below or tweet me using @laurajroach.

An affiliate link means that I make a small profit from the purchase via one of my links. This does not cost you anything and helps support my blog.